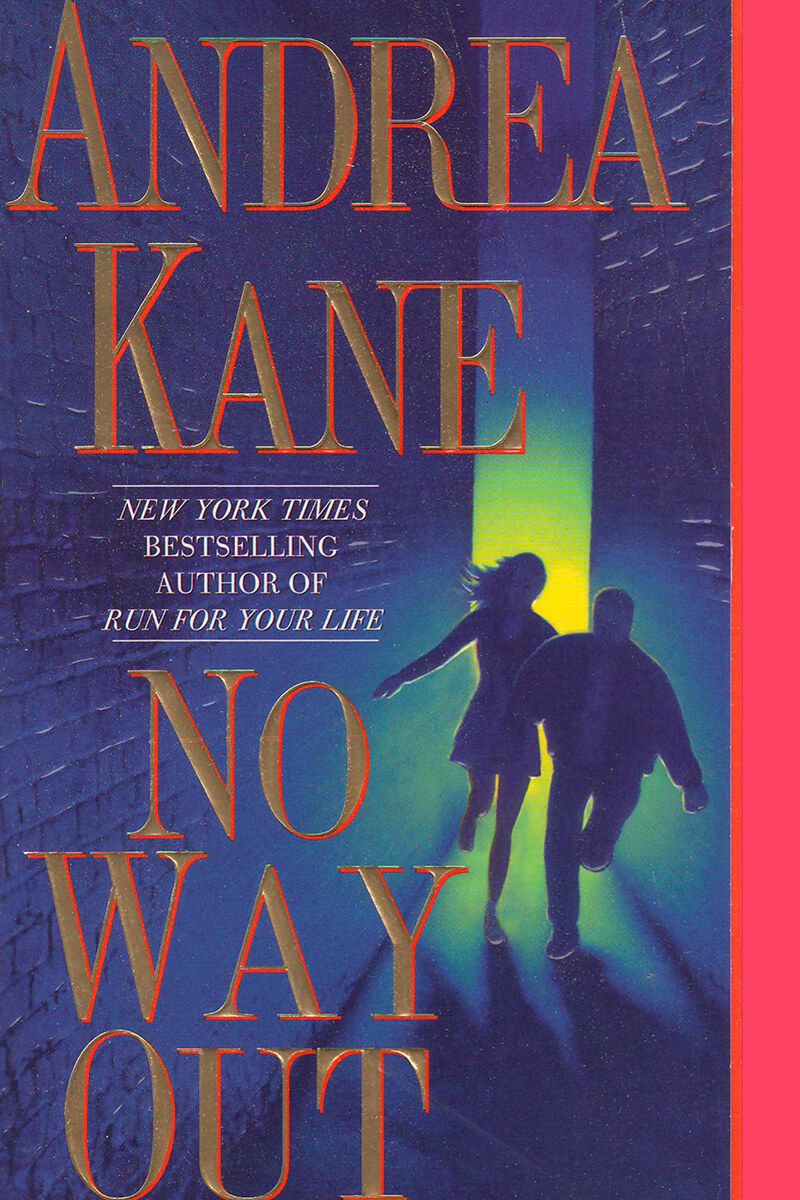 No Way Out
by Andrea Kane

Something is wrong with teacher Julia Talbot's favorite second-grader, the mayor's son Brian. Seeing the outgoing little boy become increasingly anxious and withdrawn, she suspects problems at home, inside the mansion of a high-profile political family. But even Julia doesn't know the real truth. Venture capitalist Connor Stratford, the boy's powerful uncle, does.

Intrigued by Julia, Connor plans a campaign of seduction designed to keep her from snooping-- and to get her into his bed. Yet Julia has already learned too much. As danger bears down on her like a runaway freight train, Brian vanishes, and a desperate hunt to find him draws Julia deeper into a family's secrets and an irresistible passion-- and closer to a place where a child's future, and her own fate, hang in the balance.

She had to get out of here.

Julia gritted her teeth as she fought the crowd surging back and forth through the mall. She shoved her way to the door leading to the twelve-story parking garage. Wall-to-wall people. Everything was called a grand opening. This felt more like Mardi Gras in New Orleans.

Coming here today had been stupid. The Stratfords were enveloped by spectators, surrounded by members of the press. And the mayor was flanked by his father and brother-- a clear message that the Stratfords represented a unified front. Even Julia's desperation hadn't been enough to get her through. She'd have to find another way.

Taking an elevator wasn't an option. There was already a huge line waiting and, as each car opened, Julia could see they were all filled to capacity. The stairwell wasn't much better, but it was her only choice. She scaled each level as quickly as she could, wincing as the deejay's music rocked the concrete walls and vibrated through her head.

Eventually, the throngs of people began to thin out, and the music to fade as she put more distance between herself and the celebration. She was worried sick, and frustrated as hell. If what she suspected was true, then an hourglass was running out. It was up to her to stop the flow of the sand.

She exited the stairwell on the eleventh floor, where she'd wedged her car into the only available parking space-- a space that, thankfully, was far away from the opening day pandemonium. Reflexively, she groped for her keys as she walked.

The screech of tires was what alerted her.

Her chin came up just as the silver Mercedes blasted around the corner, bearing down on her with lightning speed.

She knew she was its target. She also knew why.

Her hunch had been right. And she was about to be silenced.

A frozen moment of fear paralyzed her. Abruptly, it shattered. A surge of adrenaline jolted through her, and she tried to jump out of the way.

She couldn't make it.

She felt the stunning impact, and then a dazed awareness as she was hurled through the air. The concrete floor came rushing up to meet her.

Brian, she thought, shards of pain piercing her skull. Who's going to save Brian?