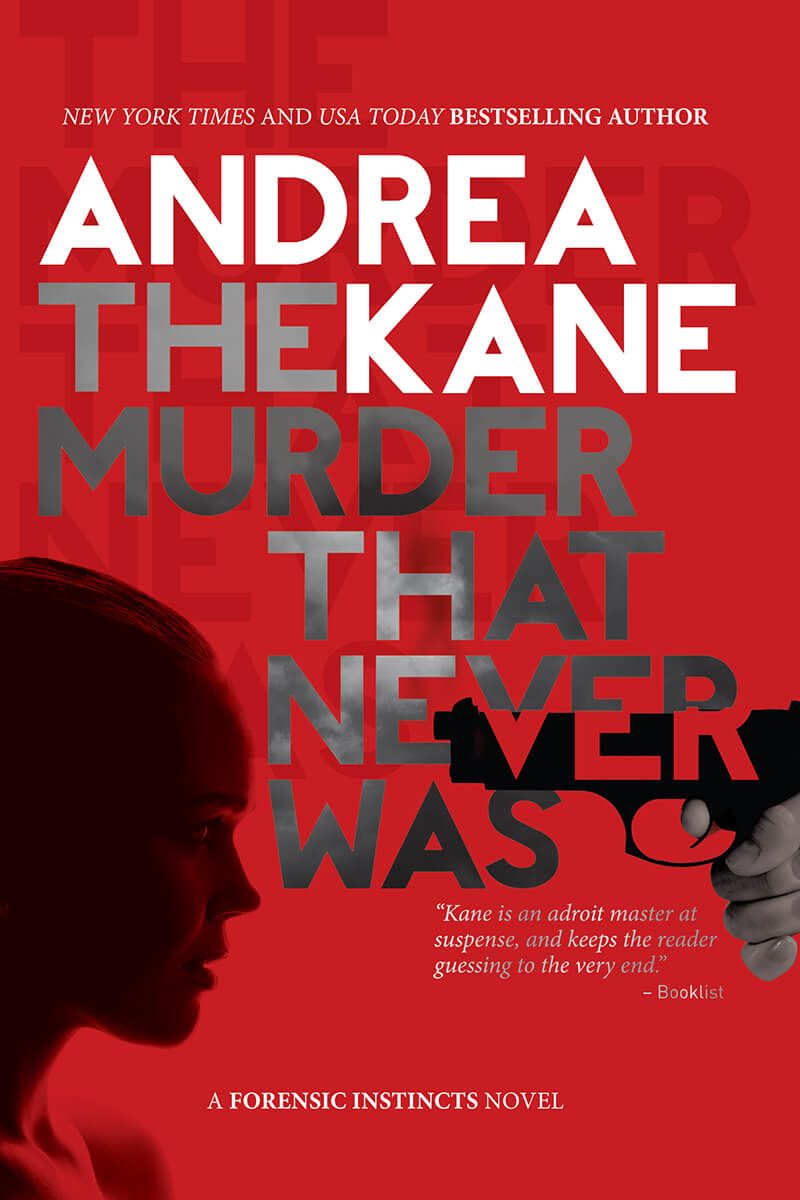 The Murder That Never Was
by Andrea Kane

A serendipitous crossing of paths between Lisa Barnes, a down-on-her-luck job seeker, and Julie Forman, a personal trainer to an Olympic hopeful, forever changes the course of both women's lives. One winds up dead and the other finds herself a fugitive, hiding behind one lie after another as a cold-blooded killer methodically hunts her.

Desperately trying to stay alive, the terrified woman enlists the help of Forensic Instincts, a rogue investigative team that clandestinely operates in the gray area between legal and illegal. Safeguarding their client's deception, Forensic Instincts digs into dangerous territory as they try to find out who's after their client—and why.

Meanwhile, bodies are piling up in Chicago, New Jersey, and Vermont as a megalomaniacal genius will stop at nothing to eradicate anyone who threatens the success of his medical breakthrough.

With an unhinged client and a monstrous criminal enterprise as its adversary, Forensic Instincts is forced into uncharted territory to protect their client and save one of their own from becoming the next corpse.

Lisa opened the front door and peeked down the street. The sun was starting to dip down toward the horizon, and there was still no sign of her benefactor.

The May evening was still warm enough to sit outside, and Lisa needed the air anyway. After a full day of waiting on rich women and a few hours of deep house cleaning, she was ready to relax.

She poured herself a glass of ice tea and went out to the front porch, sitting on the top step to enjoy the evening and wait for Julie to arrive.

This wasn't a bad mood. This was bad.

Lisa's stomach clenched. She rose and put her ice tea on the small outdoor table.

She was just about to hurry down to see what was wrong when a car sped down the street, stopping right next to Julie. The passenger door flew open, and a barrel-chested man with tattoos on his arms stepped out. He was holding a gun.

Julie turned, startled, and dropped the bag she was carrying to the sidewalk.

She didn't even have time to scream.

It happened in two seconds. Pop. Pop. Two muffled gunshots, straight into her head. The killer grabbed the bag off the sidewalk and jumped back into the car, which then screeched off.

Julie had crumpled to the street, blood gushing from her skull, the contents of her purse spilling out around her. Cosmetics, wallet, cell phone—everything rolled onto the street.

For an instant, Lisa froze, bile rising in her throat.

Then, she raced down the stairs and straight to Julie's lifeless body.

She squatted down. No pulse. No sign of life. Julie was gone.

Had those bullets been meant for her? Had they found her after all these years?

Lisa's head flew up, and she looked all around. The block was deserted. The killer had used a silencer, and no one had heard the shots but her.

It was just her.

What the hell should she do? If the drug ring was after her, they'd come for her again as soon as they realized they'd killed the wrong girl.

Unless they never found out.

Self-preservation took over. Lisa reached over and grabbed Julie's wallet, cell phone, checkbook, keys—anything that could identify her as Julie Forman.

Digging into her own pocket, Lisa pulled out her ID wallet and dropped it next to Julie's purse.

That's all the time she had. She could already hear sirens approaching, which meant that someone had heard the screech of tires, and maybe even seen Julie's body, and called for help. She prayed they hadn't spotted her. She couldn't wait around to find out.

Shaking violently, with tears of sorrow and panic splashing down her cheeks, she glanced one last time at Julie's body.

Then she took off.