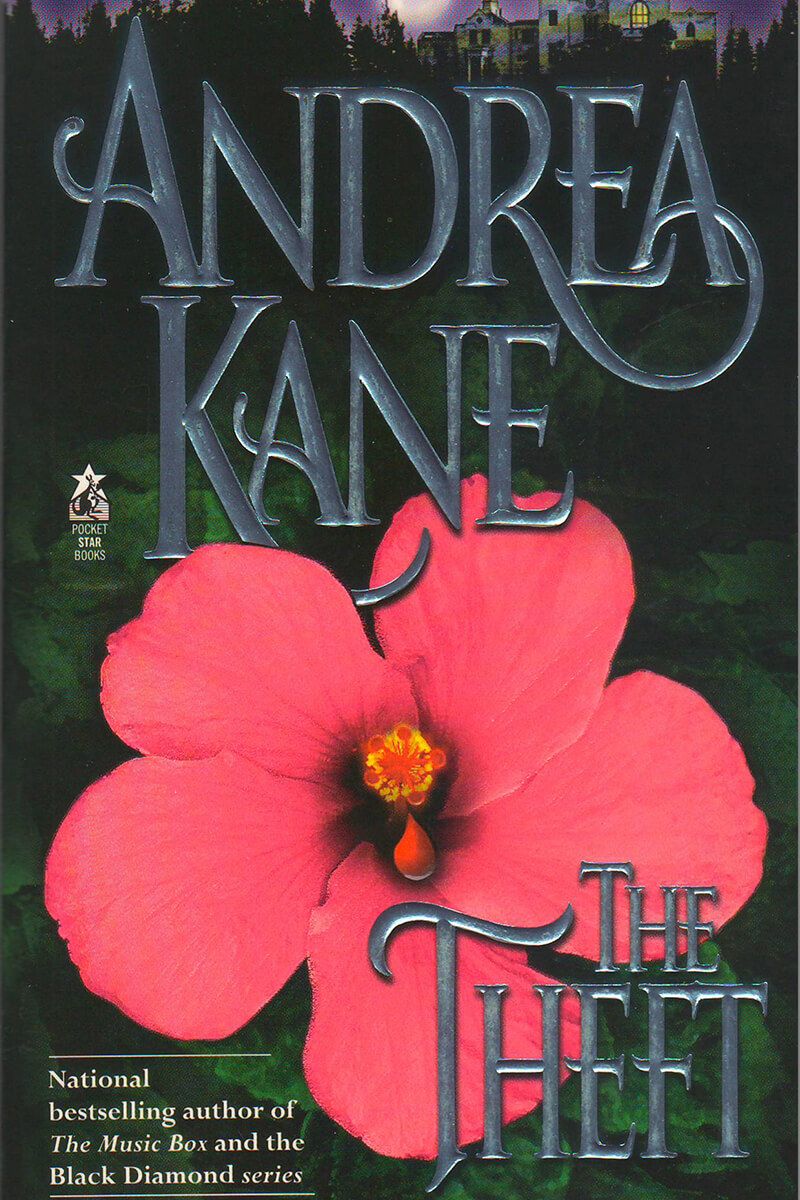 The Theft
by Andrea Kane

Lady Noelle Bromleigh is determined to unravel the mystery shrouding her birth. She coaxes information from her loving adoptive parents-information on the unscrupulous Franco Baricci, who seduced and abandoned her mother. But knowledge alone is not enough, for Noelle can't rest until she makes peace with her past. Despite the danger Baricci represents, she travels to London to investigate him. There, she finds both peril and excitement greater than she ever imagined when she meets an enigmatic but seductive stranger with a dark mission.

Ashford Thornton, the earl of Tremlett, is hot on the trail of the art thief Baricci, and he has good reason to suspect that lovely Noelle could be involved. She may seem an innocent, but her interest in Baricci is highly suspect. And even if Noelle isn't Baricci's accomplice, Ashford cannot afford to let her steal his heart. For Baricci is not the only man with secrets-and the one Ashford is hiding could endanger the woman he is fast coming to love.

Noelle's expression was the epitome of unfeigned innocence. Ashford would stake his life on the fact that she hadn't a clue where Moonlight in Florence was or who was behind its theft.

Then why the hell had she visited Baricci?

As if reading his mind, Noelle continued of her own accord. "Several valuable paintings have disappeared recently, according to what I've read in the newspapers."

Ashford tensed. "Yes. They have."

"Do you believe the thefts are related?"

"It's quite possible." He waited, wondering where she was headed and why. Was she merely expressing her own charming brand o curiosity or was she pumping him for information-- information she planned to pass on to Baricci? The latter was highly unlikely. Still, he had to be sure.

It was Grace who responded.

"We've arrived at the station," she barked, peering out the window.

There was only one thing LEFT to do.

"You're neither an artist nor a dealer. So what possible business could you have with Franco Baricci?" he demanded, resorting to his last hope: the element of surprise.

Plainly, it worked, for Noelle started, her pupils dilating before her lashes drifted to her cheeks, veiling her magnificent eyes. "You don't mince words, do you, my lord?" She twisted her hands in the folds of her mantle, awkwardly weighing her words. "My business with Mr. Baricci was personal in nature," she said at last. "I'm not comfortable discussing the details with a stranger."

"After today, I didn't think we were strangers."

Her lashes lifted, and a tiny smile curved her lips. "Perhaps not. But we're hardly friends either."

"I'd like to change that," he said quietly as the carriage rolled up to the station and stopped.

"Why? Because of your interest in Mr. Baricci?"

"No. Because of my interest in you."

A charged silence, during which Ashford's driver came around and opened the door. "Waterloo station," he announced, offering a hand to the ladies.

Fortunately, Grace was seated closer to the door. With a disapproving scowl at Lady Noelle, she accepted the driver's assistance and descended to the street.

Ashford waited until Grace was poised outside the carriage. Then, he made his move. He lurched forward, his fingers closing around Noelle's, staying her as she made to rise. "I want to see you again."

Those exquisite sapphire eyes glinted with anticipation. "Are you asking to call on me, Lord Tremlett?"

"Ashford," he corrected, his thumb caressing her wrist.

"Ashford," she reiterated, whispering his name in a breathless way that made his blood heat.

He brought her fingers to his lips, as much on instinct as on design. Whatever the hell he was doing far transcended his hunt for Baricci, and he knew it. "Yes, I'm asking to call on you-- Noelle. May I?"

"Good. Then expect to hear from me."

"My lady!" Grace bellowed her summons over the noise of the busy London station.

"I'm coming, Grace," Noelle called back. Reluctantly, she withdrew her hand, gathered up her skirts, and exited the carriage. "Thank you, my lord," she said, turning to face Ashford. "For the ride, the game of piquet, and the fascinating conversation."

"Don't thank me," he replied, holding her with his gaze. "At least not yet."